Adding “Cool” to your Family Travel

Posted on April 24, 2012 by expertbucketlister 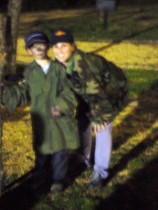 A Friend of mine just mentioned her 10 year old son no longer thinks she is cool! It got me thinking to when my son was that age. Starting to pull from the family, I wanted a chance to show him I was still cool and experience something memorable. For his birthday, we treated him to a mother/son weekend in Huntsville, Alabama. That is where you will find the U.S. Space and Rocket Center. They offer amazing weekend programs controlling a Space Mission or on a Fighter-Pilot endeavor, at Space Camp or Aviation Challenge.

My son loving airplanes, chose the Aviation Challenge. In this military program, we slept in barracks and our days were spent on mission training, operations and even Top Gun maneuvers in F-18 Hornet flight simulators. The highlight for me was when our survival skills were tested. Dressed in battle fatigues and war paint, we were sent crawling, in the dark, through a wooded area filled with staged enemy fire and landmines.

Together we worked as a team and learned everything we could want to know about aviation. My son also learned  leadership and enjoyed the US Space and Rocket Center over the weekend. But mostly we had fun and spent time together. The best part, was on our flight home when he said, “that was the best ever”! Thats when I knew, he still thought I was cool.

This site uses Akismet to reduce spam. Learn how your comment data is processed.

Is the Loire Valley on your Wine travel bucket list?⁠
Medoc and Haut Medoc????⁠
The beauty of the French Garden?⁠