How to view African wildlife from the River 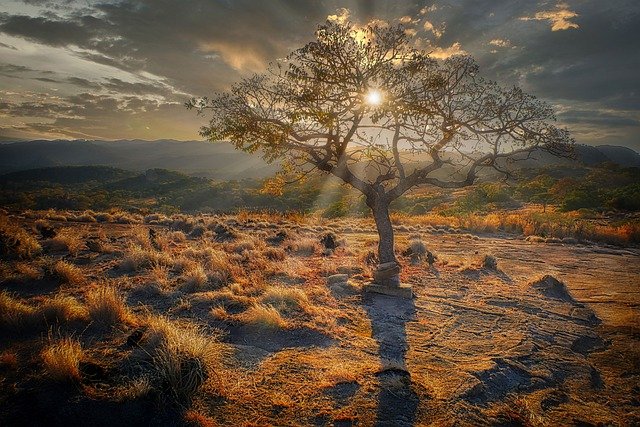 Africa, an outdoor enthusiasts dream. An entire continent of open space filled with five ecosystems each offering a unique aspect to the landscape. Deserts, mountains, savanna’s, rain forests and coastline. One of the few places on earth where despite being the second most populated continent still contains many locations that look just as they did hundreds or maybe even thousands of years ago.

Visiting Africa for its amazing scenery, landscapes and its most endearing feature it’s biodiversity. Containing the most flora and fauna still in existence Africa is one of the most desired locations for travelers looking to step into a world completely different then their own. 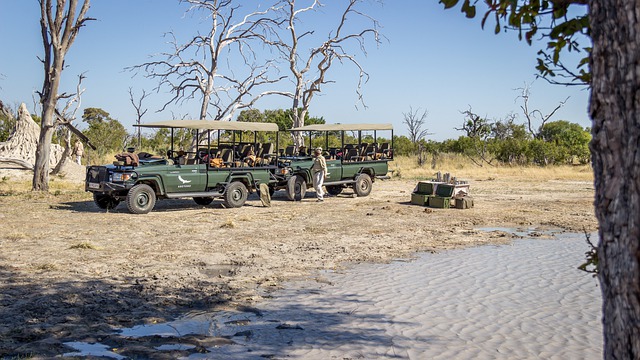 Excited passengers whisking off in 4 x 4 vehicles on protected wildlife Safaris led by a local guide to search for the Big 5 (Cape buffalo, elephant, lion, leopard and rhinoceros) among others. But there is another experience, one less considered and yet an amazing more intimate way to see wildlife in a natural and sustainable way.

The one source that all animals need for existence is water. Which is what makes very important to the existence of Africa’s wildlife, the rivers. 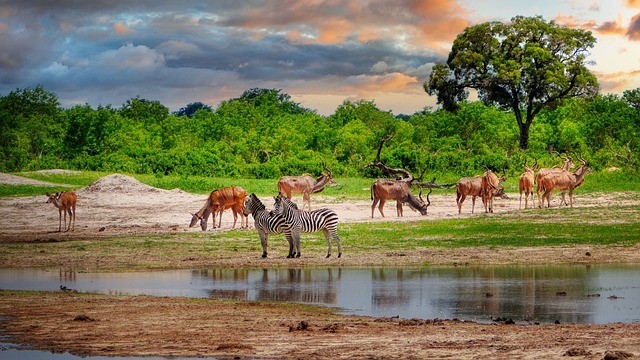 Africa has dry and wet seasons that occur annually interacting with the animal behavior driving them to and from the rivers, their main source for water.  On average Africa’s wettest season is from April to early June and they see some rain October – December. However June through September is the dry period when animals begin migration to and along the rivers for sustainability.

Like the animals, traveling along the rivers can offer explorers a unique experience for up-close wildlife sightings and viewing of wildlife in their natural habitats as they play, socialize, feed, bathe and rest. 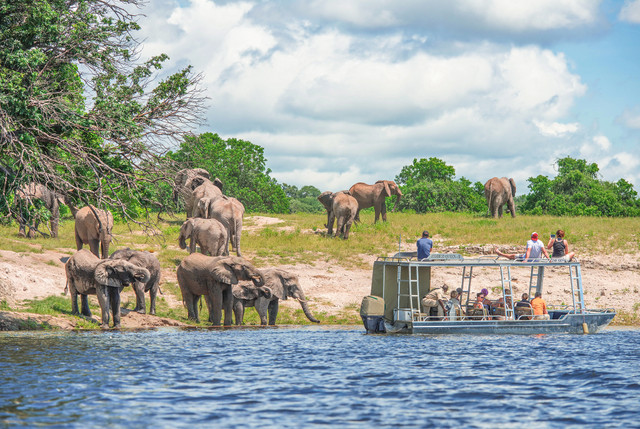 Traveling the Chobe and Zambezi rivers into the Chobe National Park in Botswana, brings guests to the source that attracts wildlife from hundreds of miles to the only water available during the African dry winter months. Offering unobstructed views of herds of elephant, giraffe, hooved animals and hundreds of birds all visiting for the season.

In addition to the wildlife experience, the scenery along the river offers many opportunities for unexpected views of the river and the African landscape. Don’t be surprised if you also come across some other unexpected surprises like the breathtaking sunsets that you can see from your cabin balcony. 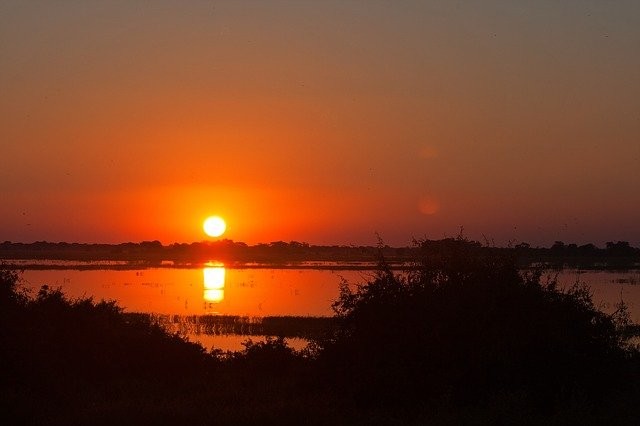 The best part of an African river cruise is you don’t miss out on the land safari’s. Time is also spent exploring on safari in the Chobe National Park among other areas within Botswana, Zambia, Zimbabwe and Rwanda.

Visit national parks, iconic locations like Victoria Falls and private game reserves all while enjoying the best available five star accommodations that are arranged for you based on the itinerary that you choose.

Enjoying an African river cruise can offer many opportunities for immersing in the local culture, exploring the best sites and experiencing the bucket list adventures that most interest you. 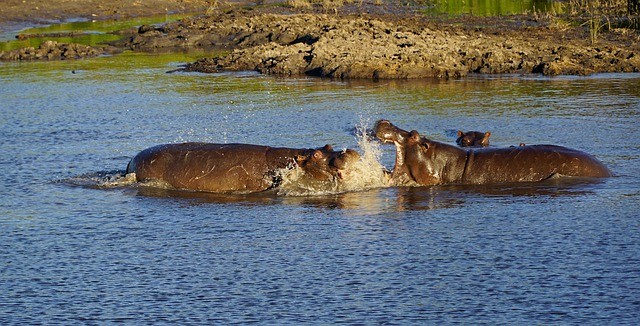 For more information on African river cruising, check out our website and let the adventure begin…….

Where to Go on Safari in Africa

One of the tops on many bucket lists is visiting Africa. Getting close up encounters with animals in their natural environment is an experience that will be different for every guest based on time of year and how they choose to visit. The best way to experience wildlife in Africa is by safari but with many regions within Africa with wildlife, how do you narrow down your options of where and when to visit.

Two of the best countries within the continent of Africa to visit for a safari experience are Tanzania and Botswana:

The United Republic of Tanzania is an African country in East Africa that has coastline on the Indian Ocean, Bordering Uganda in the north, Kenya in the northeast, Mozambique in the east, Zambia to the southwest; and Rwanda to the west. Tanzania is most known for Mount Kilimanjaro, the largest mountain in Africa.

The best time to visit Tanzania to enjoy the wildlife is based around the rainfall. While the summer period is November to February and the cooler winter period is May to August, the rainiest periods are October – December. The ideal time is during the drier shoulder periods of March, April, August and September.

Approximately one-third of Tanzania’s land is dedicated as a protected conservation area featuring 16 national parks in addition to game and forest reserves. Featuring many biodiverse areas you will find a variety of animal habitats:

Serengeti – The Serengeti plain is where you will find the largest concentration of wildebeest and zebra who are known for their annual massive migrations when the herds move north from breeding locations to the grassy southern plains. For sure a not to miss experience, movement can be seen year round, but the massive movement will occur July – October when they can be seen crossing the Mara river in the Northern Serengeti. You will also find giraffe, gizelle, impala and many species of reptiles in the region like crocodiles who habitat in the Grumeti River.

Ngorongoro – the Manyara National park is where you can experience a game drive of animals including lions, cheetahs, monkeys, baboons and impalas. You will also want to visit the three million year old Ngorongoro crater which is the largest volcano caldera in the world and home to a gorgeous wildlife sanctuary filled with large mammals like hippopotamus who live in the lakes, bush and plains of the caldera. To experience the great migration that occurs here annually, you will want to visit between July and September.

Unlike Tanzania, Botswana is primarily flat with the majority (70%) of it belonging to the Kalahari Desert. Located in central Africa, it borders South Africa in the south, Zimbabwe in the northeast and to the west and north of Botswana is Namibia. Besides the large area of desert, you will find the Okavango Delta, one of the largest in the world in the northwestern portion of the country.

Why Botswana if it is mostly desert? Because of the diversity of the wildlife that you can find here. Besides desert and the delta, there are savannas and grassland regions where you will find wildebeest, antelope, the endangered African wild dog and the biggest concentration of African elephants in Africa which can be found along the rivers during the dry season. September is the peak time for experiencing wildlife as it is the end of the dry season.

Chobe National Park – Botswana’s original national park located in the Okavango Delta is biologically diverse making it a prime destination for experiencing wildlife. Taking a safari through the park has one of the largest concentrations of wildlife to observe when looking for the big 5 (lion, leopard, elephant, water buffalo and the rare rhinoceros). Specifically lions can be easily spotted who reside in the area for the presence of the large number of elephants and their young who track them as their primary predator.

The Chobe River –  a key location for spotting the “Big Five” game during the dry months. Both sides of the river are protected wildlife management areas. During the dry season the Kalahari elephants, lions and buffalo reside at the river, especially during the end of the dry season when families can be spotted from boats as you travel along the river. A highlight is the daily elephant bathing ritual which offers amazing afternoon photo opportunities.

Safari Lodges are found throughout both Tanzania and Botswana. Unique experiences featuring luxury and modern tented camps that offer immersive wildlife experiences. Seeing nature free from human intervention is the highlight of staying at a safari lodge. You will never know what encounter awaits you as you relax in your tent or while relaxing within the grounds before or after your safari. All inclusive, a stay at a lodge includes meals, guided safari and wildlife spotting, night-time campfires with all the amenities you would expect at a five-star resort but with a rustic charm. With so many to choose from, there is one that fits every budget and travel style.

With so much to see, how do you explore these regions seamlessly and enjoyably? Imagine an experience that combines all of the experiences in a 10 – 21 day African experience. Start your journey on land combined with four nights on a small private luxury African boat drifting along the river all the while having an up-close wildlife experience before heading back on land for more time to explore the villages and highlights of the region.

Where are we sampling wine today?
Arles, a former haunt of Vincent Van Gogh may be one of the most beautiful cities in France.
Where to stamp your passport in 2023?